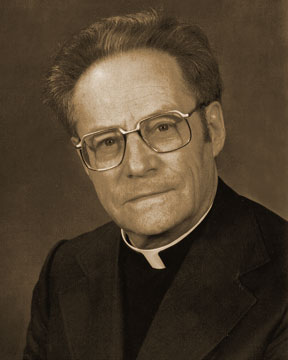 Lionel Daigle was born in Saint-Hilaire, NB, on January 1st, 1908, into a large family of talented musicians. After attending the village school, he completed his classical training in Bathurst in 1930. He was ordained a priest in 1934. Along with his religious devotion and his involvement in community and social causes, he was a builder and educator who aspired to have classical music appreciated for its importance and value.

Everywhere he went, his passion to share his love for music followed. Grande-Anse was his first parish and he formed a musical group there. From 1935 to 1945, he served as curate in Saint-Basile where he founded two orchestras.  He became curate of the Baker Lake parish in 1945 and in 1951 was transferred to the Clair congregation where he oversaw the construction of the existing church. In 1966, he founded Les Jeunes Violonistes de Clair. Mgr Daigle retired in 1980 at the Hôtel-Dieu in Saint-Basile. Surrounded by devoted collaborators, notably Sister Alda Boulay and Mrs Isabelle Lajoie, he furthered his cause. After starting the beginner’s violin course for the kindergarten children, he founded the Petits Violons de Saint-Basile which received continued support from the Religieuses Hospitalières de Saint-Joseph and the Saint-Basile Cultural Society. A first music camp was offered in 1982. With qualified instructors, Mgr Daigle taught music and string instrument classes, including the violin, cello and contrabass.

For his unwavering dedication, he received the Order of Canada in 1978 and the University of Moncton awarded him an honorary Doctorate in music in 1981.

In the eyes of this generous and patient man, every child was gifted with talent and all that was required was to help them bring it out. In 1990, the Fondation Mgr-Lionel-Daigle was formed to help underprivileged children have access to violin training. In his honour, Les Petits Violins de Saint-Basile were renamed in 1995, Les Petits Violons de Mgr-Lionel-Daigle, who are celebrating this year their 30th anniversary.

The musical groups founded by Mgr Daigle performed throughout Canada and abroad and his students have gone on to play in prestigious orchestras such as the Orchestre symphonique de Montréal (OSM).  Several have gone on to pursue professional music careers.

Mgr Lionel Daigle died on September 17, 1998, at the age of 90.  Not only did he leave us with an exceptional musical heritage, but also with warm and fond memories of a humble and devoted man whose biggest joy was to attend concerts of HIS P’tits Violons.