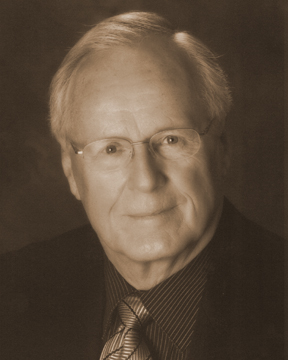 Gilles Guerrette is truly what we can consider an icon of Edmundston’s musical history. While he’s well-known for his participation in different musical groups such as the             « Quintones » in the Fifties or Replica Jazz today, his great contribution lies in the musical knowledge he has bestowed on an entire region. This is perhaps his biggest accomplishment. We owe to Gilles Guerrette the creation of the celebrated Edmundston Jazz and Blues Festival. The arrival of a successful new festival on Edmundston’s cultural scene is a feat in itself. But more importantly, it’s through Mister Guerrette’s vision that an entire population has become, over the years true Jazz and Blues connoisseurs. What a heritage that is in a community such as ours.

While a true jazz aficionado, Gilles Guerrette has never been biased in regards to music. With his open mind, he has embraced traditional music with professionalism and passion. As musical director and accompanist with the « Danseurs du Madawaska » for many years, he always knew how to unite on stage the very best musicians. While he has always believed in the importance of music for his community’s quality of life, he saw in the « Danseurs du Madawaska » a perfect tool to promote music and our area’s history, which explains his long-term involvement with this traditional dance troupe, both as musician and chairman.

His work is constant, his dedication unfailing. He has offered a number of jazz workshops to groups of Cité des Jeunes A.-M.-Sormany art students, convinced of the importance of initiating kids to different musical styles. Those who have had the privilege of attending these workshops remember his passion for quality music in all 20th century styles. How many young musicians consider him a mentor, and turn to him for insight. He has always known how to encourage them to pursue their dreams through formal training.

Gilles Guerrette is a professional musician and an exceptional builder. He insures consistency through his profound dedication to the development of musical knowledge within his community. He remains to this day a model of availability and steadfastness in his musical work.